This weekend I attended one day of a local tournament. I played 3 games at 1,500 points. Let's see how I went... 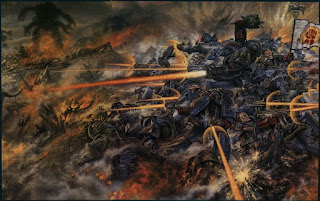 Since moving interstate, I've joined the wargaming club at uni. It's a great little club. Most people play either 40k/30k or Flames of War. It's a friendly environment that never gets too competitive. Last week they held their annual ANU Con, including a 1500 point friendly tournament. Fresh off the high of winning two games in a row last week I was keen to get stuck in and give my Space Wolves a run to see if I could expand on my tactical supremacy.

My Army and My Tactics

For this tournament I decided to take my Space Wolves. I'm having a lot of fun playing with this army and generating sagas for them. I ran the same list as last week:

The plan is simple. I'm using The Wolves Unleashed detachment from the Space Wolf Codex. This gives me the option to roll to see if my units get outflank, but more importantly it lets me bring a unit in from reserve without having to roll for it. Considering my Stormwolf has to start in reserve and one of my drop pods will be in reserve after turn 1, this is a pretty useful rule. It lets me control to a good degree how and when my reserves will come in.

Basically I drop two pods of grey hunters down Turn 1. The melta-hunters take out any pesky armour, and the plasma-hunters and rune priest take care of any heavily armoured or particularly frightening infantry etc. Then the grey hunters usually cop a charge in the next turn, but that doesn't bother me too much as counter attack means they basically always count as charging in the first round of combat. After that, Lord Manton and his squad lend some punch to the hopefully tar-pitted combats, and if he survives, the dreadnought can cause some mischief. 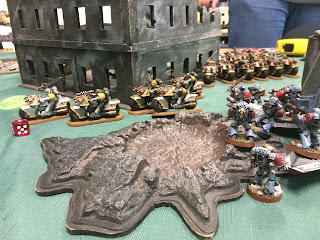 In my first game, I came up against Kor'sarro Kahn and his White Scars. That means bikes! Lots and lots of bikes. With the whole army having Skilled Rider and Hit and Run, these guys were incredibly fast, and impossible to pin down in combat. That meant that in this Maelstrom of War format tournament, I started on the back foot. The superior mobility of the White Scars/Argent Fists meant that my opponent was able to zip around the battlefield claiming objectives left and right. The fact that he had Objective Secured on all of his units also meant that he was able to capture objectives that I was sitting on. 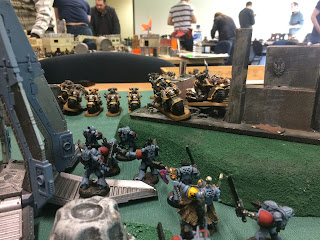 BUT! Despite the set backs, I was really happy with how the game went. I lost my plasma gunner in turn one to Gets Hot, then in turn 3 my opponents two Storm Hawks came on and shot my Stormwolf out of the sky, with Lord Manton and his whole squad still embarked. As the smoke cleared from the wreckage, only Manton and one Grey Hunter were left standing. The fall must have rattled Lord Manton because he managed to die to a bike tyre to the face, Hammer of Wrath style.

Despite these horrific events, the Wolves fought on with furious determination! At the end of the battle, I had 7 marines left, including the Rune Priest, plus my Dreadnought. Considering the massed T5 of the White Scars, I was happy with how many bikers I managed to kill.

A Drop Pod assault amongst the trenches! 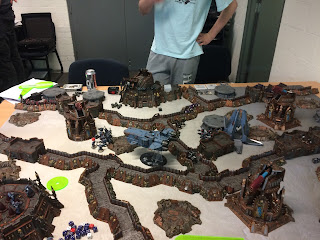 This game was a much better-run affair for me. My opponent was running MSU Demi-Company with the Iron Hands Chapter Tactics. Even though he had 6+ Feel no Pain all across his army, I was able to do enough damage that he just couldn't counter. Added to this was that he had a similarly static army to me. This meant it was a relatively low-scoring game, which wasn't helped by the fact that we kept drawing impossible objectives like 'destroy an enemy fortification'.

I was happy with this game because it felt like my tactical decisions played a role in my victory; it wasn't just luck of the dice. My opponent set up all along the trenches in his deployment zone. So in response, I set up my Long Fangs in the corner, and then dropped my army down on that side of the board. This effectively cut out a big chunk out of his army, allowing me to fight half the army at a time.

A special mention goes out to his Scouts who managed to tie up my melta-hunters for a good three turns in combat. Also, the 'gentleman's agreement' that we had between my Long Fangs and his Devastator squads was pretty hilarious.

GAH! This was one of those games. The Ravenwing's Scout plus the speed of the army meant that he was right on top of me in rapid-fire range on turn one. Added to this he had twin-linked plasma talons, which effectively never get hot, and re-rollable jink saves, AND can overwatch at BS2. simply put, there was not a lot I could do. It certainly didn't help that the Dice Gods saw fit to punish me for criticising the design of the Deathwatch dice I was using (that's gotta be the reason). It was a massacre. I think in all I managed to kill two bikers and a Land Speeder. I think I scored two VPs, I don't even know, I stopped counting.

Final Score: I think I threatened to go play Warmachine at one point...

Tournaments are fun!
Sadly, there were no saga-worthy deeds this day.
All my men performed as they should, or below expectation.
Still, I managed my one win for the day, so I left a happy man.
The only disappointment was that only I played
against Space Marine armies.
I finished 9th out of about 20.
Top Ten! Whoop Whoop!