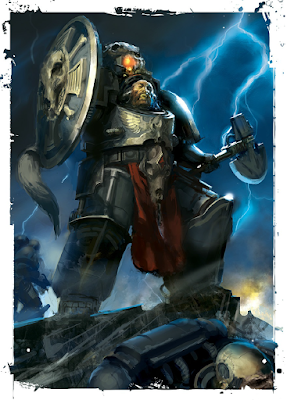 I attended a 1,500 point, matched play, friendly 40K tournament over the weekend. I took my Space Wolves and won two of my three games. Read on for my army list and my thoughts on Space Wolves thus far... 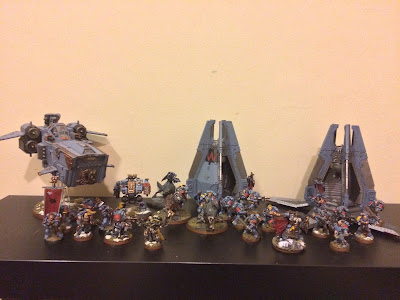 The idea behind this army was to try out min-maxed grey hunters. The flexibility of the grey hunters unit is something that's really worth exploring in this new edition; we can tool up our basic troops, and they are one of the only basic troops choices able to take boltguns, bolt pistols and chainswords. It's important to remember too, that the Grey Hunter squad comes with two potential "sergeant"-type characters: the Wolf Guard Pack Leader and the Grey Hunter Pack Leader. The only difference between these dudes is weapon options and a point of leadership. This is how I managed to cram two power weapons, and a combi-weapon into each squad. The option to give one Grey Hunter a plasma pistol, now a bargain at 7 points, further buffs the squad's shooting capacity. One thing I learned from the weekend is that because the controlling player can choose casualties now, it's worth loading up one or two guys with all the toys. This gives a couple of cheap, ablative wounds to support the meat and potatoes of this list, which is the elite, tooled up Grey Hunters. This will result in that couple of guys in the unit costing up to 50 points or so each, but it means that you can spare a few casualties before the unit's true potential is whittled away.

I was also keen to try out a Wolf Guard Pack Leader in Terminator Armour. He performed quite well and provided a bit of durability. I'm really glad that this is an option that stayed in the new edition. Unfortunately, you can't put terminators in drop pods anymore, so this means that you need either a Land Raider or a Storm Wolf, otherwise your boys will be foot-slogging it across the battle field. Outside of a narrative game where you're the defender, or a city fight, I can't see this being a viable option. The terminator's reduced movement means he's further slowing down a unit that really wants to be in the thick of things. The big take away for this option is that storm bolters are now Rapid Fire 2, meaning that once you get inside that 12" sweet spot, they really pack a punch. I'm thinking of some terminator shenanigans to make the most of this development. Stay tuned for more...

Speaking of Drop Pods. They feel... expensive. And not the good "I got what I paid for" expensive. At about 100 points a pop, they seem to be appropriately costed to reflect the advantages they give, and the potential for abuse. The minimum 9" distance you need to keep from your opponent means that the old tactic of drop-podding a melta-toting squad behind enemy lines and causing havoc is no longer the point-and-shoot guarantee of success that it used to be. You'll be waiting a turn before really getting the most out of that meltagun, by which point you probably want to be punching people in melee anyway. I'm thinking the plasma gun may be a viable alternative; it's cheaper, though it has more limited damage output. The good thing about Drop Pods is the control we have over our reserves and deep strikers in this edition means getting that elusive turn 1 charge. The 9" charge is a doozy. It's hard to get off, but the wolf standard helps here with the re-rolling 1s for charge range ability. In the games that I won, having the first turn and using it to get up close and personal made me feel like I was in control of the game. My opponents were reacting to me, not the other way around.

The Stormwolf was another good performer. It really packs a punch and is great at doing it's job of ferrying troops up the field. The only problem is that flyers are nowhere near as durable as they used to be. T7 and 14 wounds is not enough to keep this thing alive for long. The same goes for Stormraven Gunships. A couple of lucky lascannon shots and these guys are crashing and burning. The lucky thing for us is that the Stormwolf sits relatively low for a flyer. This means that we can hide behind some tall terrain to get some cover if we don't get first turn, and then jump out to blaze away in our shooting phase. Just remember, these things are fire magnets. Use them accordingly. 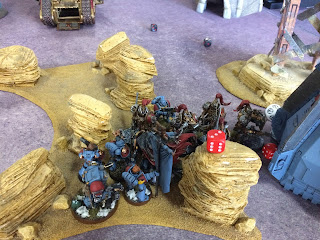 The big disadvantage with this list is the price of the units. Between the drop pods, fully kitting out my hunters and wanting three squads for the Battalion Detachment, I was forced to go with smaller units. Although this was good at chewing through other armies' chaff, when I came up against a truly elite army, the Legio Custodes, I watched my army dwindle in numbers very quickly, losing effectiveness with every casualty. Space Wolves, and Space Marines in general are now an elite army again; no more hordes in free razorbacks. Although I think this is a good change for the game, it definitely requires us to rethink strategy. All in all, there are a lot of options for the Wolves. I think the combination of Drop Pods, Wulfen and Thunderwolves can open the door for some potentially devastating armies. 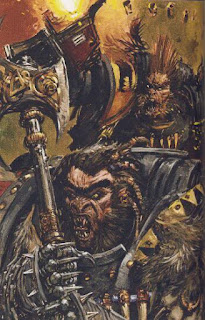 It seems as though combat is once again a viable strategy. My final game for the day was against T'au, and once I got in amongst their lines, it was carnage. I had my opponent on the ropes, and I was doing real damage to his units. The same could be said for my game against Blood Angels. There has been talk recently that 8th edition has an alpha strike problem. That is, if you get the first turn, you are at a distinct advantage over your opponent. For us, this is a boon. Being a relatively elite army, Space Wolves are going to have fewer units in the field than others, meaning we're likely to finish deploying first, getting that juicy first turn.

Another thing is Command Points. We all know about the re-roll stratagem, which is really useful, but the other stratagems are worth remembering. We can spend 2 command points to interrupt the enemy's flow of combat. In my second game, merely flipping to that page of the rulebook caused my opponent to get stressed about the order of his combats, trying to second guess what I wanted to do. This was an interesting psychological element to the game. I'm not a fan of the deliberate psyching-out of my opponent (it's a game I play for fun after all), but in a hard core tournament setting, this can prove to be the 1% that gets you over the line. It was also a nice, Space Wolfy tactic to effectively counter charge my opponent.

All in all I think Space Wolves will be a strong army at their core. Unfortunately, I think the top tiers of competition will see much the same lists that we saw in 7th ed; the simple fact is that Thunderwolf Cavalry and Wulfen are solid units. They have multiple wounds, access to storm shields and can put out a metric ton of damage. That said, I think there is still scope to build lists around Grey Hunters and other, more traditional builds.


I'm thinking I might do some unit specific articles to
help myself break down the codex/index and see what's what.
Let me know in the comments if there is any unit
you're particularly interested in.
Posted by Lord Manton at 21:44